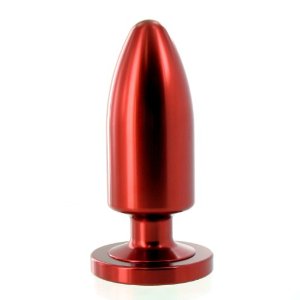 About a month ago, I had stumbled upon a link to the Tosu Two from the Bad Dragon forums. After reading through the description, I just had to try it out.

MEO describes the Tosu Two as “the smallest, virtually self-contained fucking machine in the world”. It’s a butt plug that is based on the principle of physics known as Newton’s Cradle. Many of you are probably familiar with the popular desktop toy to the right.

The Tosu Two has a tunnel that is filled with special precision-manufactured balls. These balls receive the momentum of the colliding ball and transmit it just like Newton’s Cradle, but the last ball can’t transmit the momentum and is set back into motion. The result of this is elastic thrusts where the kinetic energy and momentum are retained. For more sex toys reviews visit our friends from topmalesexmachine.com

Tosu Two next to my Black & Decker kettle. They look lovely together, since they match so well. Would it be discreet enough to leave in the kitchen? I might be able to pass it off as a kitchen gadget… (I know, I’m weird.)

Using the Tosu Two as a Butt Plug

Me: There’s just no way I can accomplish such a feat as fully inserting the Tosu Two. I’m just too petite, and my butt just can’t handle something that large that is completely solid. I think I got maybe about an inch or so of the tip in, but then I just had to give up. For your reference, that’s me holding the Tosu Two. Keep in mind that I have tiny hands and my wedding ring is a size 4.

The Tosu Two was intended more for my husband’s use but, of course, I wanted to try it out.

Needless to say, it’s very filling. He said it felt like a sort of pop, when he got it in all the way. That was probably due to the difference in size between the body of the plug and the neck that connects it to the base. A bit more of a taper would have helped. Due to the abrupt edge before the neck that connects it to the base, this may shock the sphincter muscles. He said it was a bit of a pain getting it out the first time. I think he’s learned to relax and take his time more after that first time.

Doing me doggie style with him bent over me so that he’s on all fours too is the best way to keep the little balls inside the Tosu Two rolling. With the proper thrusting, he said he could feel the balls moving inside the Tosu Two and causing a tapping sensation against his prostate, which is quite different from the vibrators we’ve tried out for his prostate stimulation. He hasn’t been able to climax with just this, but it does make sex and oral more intense for him.

There is a slight learning curve. You just have to figure out the perfect angle to have your butt at, and the perfect speed.

I’ve tried kneeling on all fours on the bed with the Tosu Two in me, trying to rock the balls to deliver that kinetic energy deep inside, but my rhythm sucks. I can get it going perfectly for a little while, and then I get out of sync. It feels similar to my Fun Factory Smartballs, but the rolling of the balls in the Tosu Two is much stronger… and much louder. It’s actually excellent for kegels, but only when I’m laying down or sitting. It’s a little too heavy for my muscles to fight gravity and hold onto it. It would be really cool to train up to be able to do that, though. I may have to make that a goal of mine.

Noise: Metal against metal makes a decent amount of noise. Even when the Tosu Two is in me, the noise isn’t muffled much. If you have roommates and you don’t want them to know, or your apartment walls are thin, you may want to take the amount of noise it makes into consideration.

Since the Tosu Two in nonporous, you can just wash it with soap and water. Let it dry thoroughly, then store it in a safe place where it won’t get dented or scratched.

Included in the packing is a small black pamphlet of cleaning instructions in various languages, a sheet with the product description in various languages, and a card advertising their EZ2 FUCK lubricant. There was also a loose leaf catalogue of some of their products that was kept together by the shipping invoice.

Hubby: Despite having a good time with it, my husband says he could use the smaller size. It’s just too much for him to handle, right now.