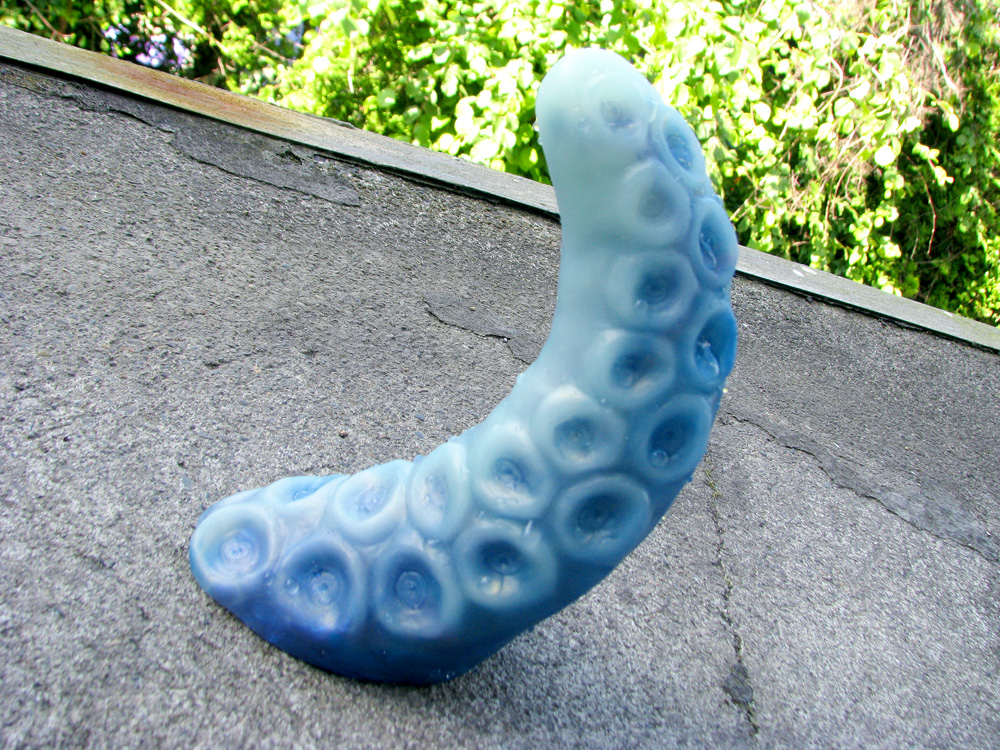 Why did I get it? (If you don’t want to read about my stupid past, scroll down to the review.)

Good question. Because I’m warped, that’s why… *sighs* All that crap before…it got me into liking tentacles. But after way too much porn, I started too feel small (I don’t have huge boobs, ok? –_-) , unpretty, and unsexy. I put a stop to it, at least I thought so. But he was still looking at it behind my back and that made me feel even worse about myself. Well, it’s over now. It still hurts sometimes. That’s why I always make sure the toys I get have clean, non-pornographic packaging, if I can. Sometimes I can’t. But I always try to let you guys know. I figure there’s other people like me out there that would like that info.

On to the review!

Design: The Tentacle is made of pure silicone and non-toxic pigments. It’s curved with a slight twist that’s great for g-spot stimulation and tapers from a large base for that full-up feeling. Once I get myself worked up enough, I can take the plunge and slide the whole tentacle in.

The suckers actually go all the way down to the base, and if I hold it just right, I can rub my clit against the suckers on the base when the tentacle is all the way in. Great g-spot stimulation, plus that full-up feeling, plus clitoral stimulation equals one awesome orgasm! ~_^ 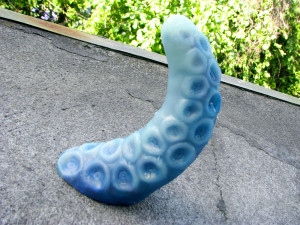 And it glows! How brightly? Pretty bright. Just let it charge in a light source for a little while and you’re good to go. The reason why things glow is because of photo luminescence. As long as light hits the Tentacle, it’ll continue to store photons. It will then give off those photons once the lights are turned off, and that’s what makes it glow. How long you keep it in the light determines how long it’ll glow.

Color: Absolutely beautiful. A combination of subtly shimmering blues and a pale glow-in-the-dark green. The pictures really don’t do it justice.

Material: Pure silicone and non-toxic pigments. A lot of toys that glow can be toxic to your system. The Tentacle is totally safe and non-toxic, though! It’s also non-porous, phthalates-free, hypo-allergenic, and latex free!

Cleaning: I recommend using a soft toothbrush to thoroughly clean the suckers if you’re going to wash the Tentacle with soap and water by hand. You can also boil it, bleach it, or stick it in the dishwasher.

Packaging: No problems at all. The Tentacle came in a plastic bag with a little slip of paper. No muss, no fuss. No stupid smutty packaging to secretly dispose of. Thank you, Whipspider! ^_^

Pros: It glows! XD Great for hitting the g-spot and any other spot for that matter. Tip tapers down to a thick base for a great full-up feeling. Suckers provide an interesting texture to rub over your clit, nipples, or wherever. The suckers make it nice to just grind against the Tentacle, too. Transfers vibrations well. Clean, simple packaging. Silicone and free of phthalates. Easy to clean and fun to use. Beautiful silicone sculpture from a group of very talented artists.

Cons: Um…well…I’m too chicken to show it to my hubby? Is that a good enough con? ‘Cause I can’t think of anything else…