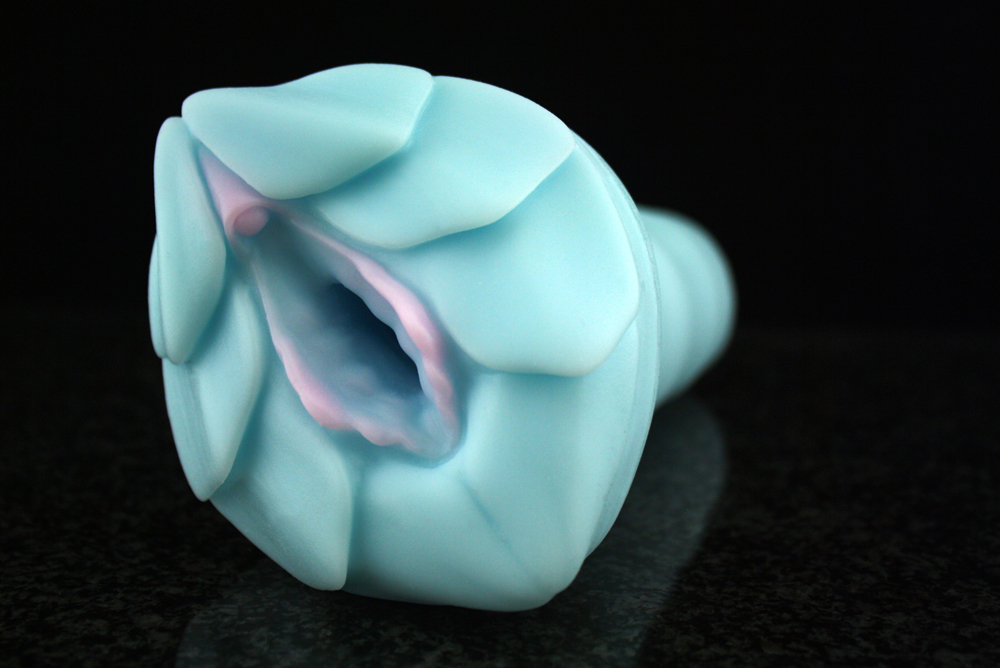 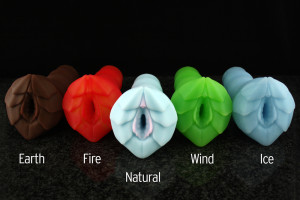 Saturday morning after she arrived, I lubed her and myself up really well and went to work trying to get her in. This proved to be somewhat difficult. It was like a little kid trying to fit a cylindrical wood block into an oval-shaped hole. I tried a few positions to get her in, but no luck. Her canal is just too soft, and the opening too blunt. I kept squishing it every time I tried to cram her into me. If you are interested in more fake pussy reviews visit our friends from topfakepussy.com

I woke my hubby up. He already had morning wood and was lying on his side next to me. I didn’t let him see what was going on under the covers. I wanted to see what he thought based on sensation alone. He asked me what I had on. “Is it some kind of ring?” (Um..why would I be wearing a ring? I’m not aware of any sex toys that are rings for females.) I told him, “No” and slid him in. I held onto the Anthro-Dragoness with my finger on her clit (partly for pretending I’m her, partly for making sure he moved through her and didn’t just move her in me.) Well, that didn’t work because he said he felt like he was slipping out (No surprise to me. Chubby hubby ends up a little shorter when he spoon-fucks me. That darn tummy gets in the way). So, he rolled over onto me and pinned my wrists. Wow…that..felt..good! I mean, his member is long and girthy, but with the added girth and length of the Anthro-Dragoness canal in me… Can we go again?

We did end up trying it again this way (but with me holding her in place this time) and it worked out much better for him. I knew he was just moving her and not moving in her the last time! He said the texture was great and me feeling tighter than normal was interesting. No surprise, he came a lot sooner that time.

That went pretty well. I had to have both of my tiny hands around her while using it on my hubby. The Anthro-Dragoness is a big toy with a good heft (Well, to me it is since I’m tiny). Guys with small hands may need to use both to hold onto her. However, keep in mind this is coming from a girl who wears a size 4 wedding ring. Yeah, I get teased for having “baby fingers”. 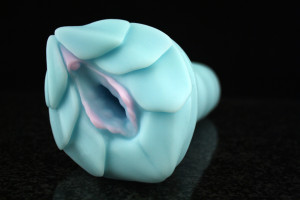 Just an FYI, if you need to jack off discreetly, there can be a slight slurpy noise from fucking her if you’ve got her pretty wet. It’s nothing a little background noise couldn’t cover up, though.

What Do I Think as a Female?

Well, the Anthro-Dragoness really does not look like me. My labia minora actually start about where the clitoral hood does, with creases on each side of it, and mine are really long. I guess if my labia minora weren’t so long and didn’t start so far up, I’d have a prettier pussy like this one. Oh well. At least the lengths they go to and the creases on either side of my clitoral hood make me look like I have a butterfly complete with antennae downstairs. If I were to imagine myself as a dragoness, though, I’d assume my naughty bits would most likely look like the Anthro-Dragoness.

Would She Fit into a Fleshlight Container?

I really can’t say for sure. I mean, there’s a possibility. She definitely does look like she might. There’s also a piece of furniture called the Fleshlight Motion Dog Days that you may be able to use her in, as long as you put a condom over the end to prevent cleaning up a mess. If not, Bad Dragon suggests sandwiching her between your mattress and bed frame and fucking her like she’s bent over your bed.

Any Problems: The only problem I found is small and probably negligible. If you take a look at the opposite end of the Anthro-Dragoness, you may notice that the hole isn’t perfectly centered, but a smidge off. It doesn’t affect play or anything, but it was just something I noticed.

Giving the Anthro-Dragoness a Bath:

Being the small thing that I am, I was able to stick my whole hand in the Anthro-Dragoness and give her insides a proper scrub down with soap and warm water, then flush her out with a strong blast of water at one end. If you can’t get your hand in (which I doubt many people will be able to do) remember to finger her to get all her nooks and crannies clean. If you really want to get her clean, you can submerge her in a 10% bleach solution and then use a strong blast of water to flush her out. You could also hold one end closed, pour some water and soap in, and then shake her like you’re mixing a drink before you rinse her out (Yes, I’ve done that. Dragon cocktail!)

Careful with those nails when you’re cleaning her! Don’t want to scratch or tear her soft silicone!

Giving the Anthro-Dragoness a Condom:

Well, the condoms that came with her seemed to be a bit small for her. I did manage to get one on, first try and everything. It actually made her a little tighter. Another way to make her tighter is to strategically place rubberbands down her. Remember to take them off once you’re done playing with her!

Condoming the Anthro-Dragoness is also useful if you really want to fill her up with lots of lube and have “sloppy seconds” type fun.

Opinion: It’s a lot of fun to slide the Anthro-Dragoness inside me and pretend I’m her. Makes it a lot easier to let her share the bed with me and the hubby. Otherwise, no other females allowed! It’s a great toy for us to share. Other than having a bit of a problem sliding her into me, I really have no issues with her, and neither has my husband. And I’m sure I’ll get better at that with lots of practice.