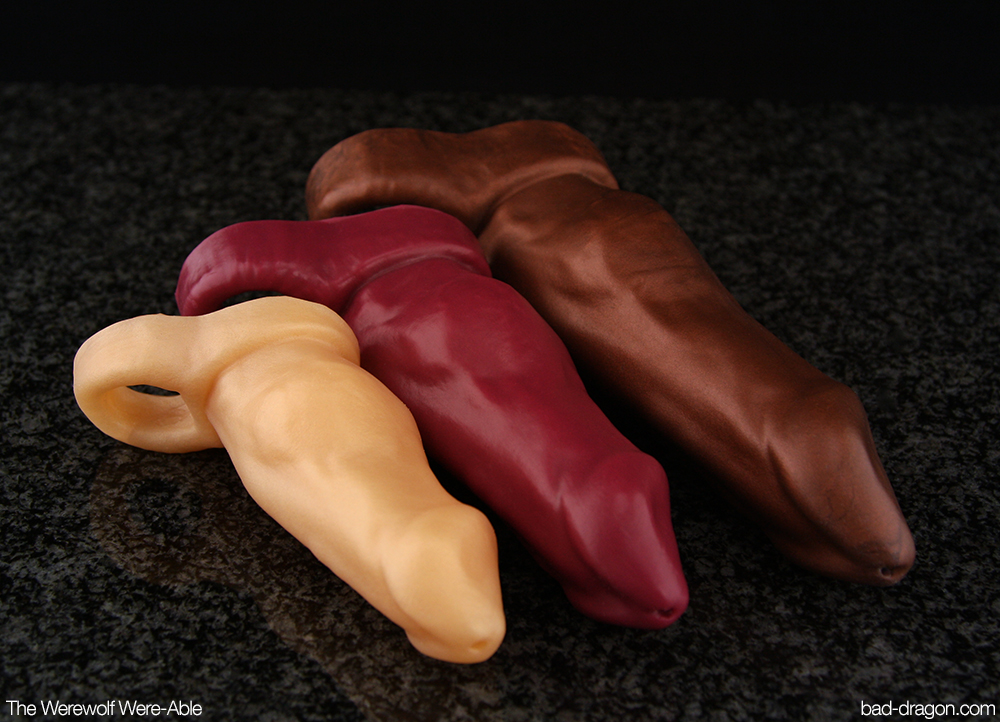 Since I have written a review for both the Fetish Zone Cerberus K9 Sheath and the Bad Dragon “Beta Test” Wearable Cock-Sheath, it’s about time to get a comparison review out. Each sheath is designed to allow the wearer to tie the knot with their partner(s). Which one is better? Well, they each have their pros and cons…

“Beta Test” Wearable Cock Sheath Basics
Material: silicone, matte finish
Compatible Lubricants: water-based lube is recommended
Sizes: medium and large (or small and large, according to the forum post) Below are the measurements for the medium that I received. Because this is a “Beta Test” sheath, measurements may not be accurate to the final product, which is not yet in production. BD had a beta test sale for a limited number of these, and I was able to get a medium.

Firmness: soft, yet dense / I would estimate it closest to BD’s medium (5) firmness
Color: I picked opaque clear, but they do have a number of colors to choose from, including colors that change according to body temperature.

Beta Sheath: The overall quality and craftsmanship of this sheath is pretty good. The high-quality silicone is completely seamless and doesn’t have anywhere that would increase the potential for the material tearing.

The silicone is thick, and mostly uniform. The only places where the silicone is a little thicker is where the bulges of the knot are, and that’s maybe a quarter of an inch of added silicone.

The thickness of the silicone used for this toy is not as uniform as with the Beta Sheath. The scrotal ring is thicker on the flat end. The knot is also thicker. Above that, the material thins to the point that you can see through it, which is designed to allow the wearer to still feel what’s going on. I would say it’s maybe the thickness of two or three condoms put together. Then, the tip is thicker, molded silicone.

Both sheaths have the ring attached slightly differently, which can, and has, ended up with different results for my husband and myself.

Beta Sheath: The ring is attached to the bottom of the base of the sheath. It’s very stretchy, smooth, and soft. I thought it would be no big deal. However, the sheath has slipped off my husband twice, and pulled his scrotal sack along with it, causing pain that has led to him refusing to ever use this sleeve again. I may just cut it off and see if he’ll be alright with it.

Cerberus: The ring on this toy is not attached to the base of the sheath, but actually extends from either side of it and flattens out into a sort of square shape, with the flat edge being thicker than the rest of the ring. Because this ring is holding the sheath more from the middle instead of just from the bottom, it lends more stability and prevents the sheath from slipping. I can’t remember ever having the Cerberus slip off and cause the discomfort that the Beta Sheath did. This ring is also very stretchy and smooth, aside from the company logo at the flat end.

Admittedly, the knot on the Beta Sheath, and really the design as a whole, looked more appealing to me. However…

Beta Sheath: Although the knot isn’t that difficult for me to take, as I have many other knotted toys, getting close enough to get the knot in was trying, to say the least. We’re pretty skinny, limber people. So, there shouldn’t have been anything to get in our way. I’m not sure how many positions we tried, but the only way we found to work was to have me on top. Doggy style utterly failed, each time resulting in the sheath slipping, pulling my husband’s balls, and eventually ending in him refusing to go near this sheath ever again. Yes, this knot is a good stretch, but I can’t say it locks, and this is after testing it on my husband and a couple dildos. The material is just too soft. With very little pressure from my fingers, I can easily compress the knot. This also makes the ridges and texture on the outside and inside of the sleeve barely noticeable, as the soft material just mutes it.

Beta Sheath: As the wearer, my husband didn’t even notice this sheath being on him. It doesn’t provide any stimulation for him at all during sex. The head is completely exposed, so that the wearer doesn’t loose any sensation.

As the receiver, this sheath definitely increases his girth. However, the sleeve is so soft that it mutes what texture is on it, and doesn’t really provide that pop when knotted. I have no issues knotting other toys, but getting close enough to my husband to knot, and figuring out a position that didn’t result in the sleeve sliding off, was rather frustrating.

This sheath will allow the wearer to ejaculate as normal, and can be used with or without a condom underneath.

Cerberus: As the wearer, my husband didn’t notice the inner texture much. The thinner membrane toward the head allows the wearer to still feel the sensations of sex, though. It’s about two or three regular condoms thick. This sheath does have a tendency to attempt to return to its original shape after putting it on. If you push it all the way down and try to get a decent amount of the air/lube out, it will create a little bit of suction. Well, at least it does in our case. Unlike sex with the Beta Sheath, sex with this sheath results in a more intense orgasm from my husband, which I suspect is partly due to the suction. He’s terrible about relaying information to me and describing how things feel. So, that’s the best I’ve ever come up with.

As the receiver, I can’t say that this increases girth by too much. It’s also completely smooth, aside from a slight seam that I can barely even feel with my fingertip. Sex with this sheath feels great with the knot banging against me, but I’ve never been able to knot this. I’m petite and, even fully aroused so that my vaginal canal is as long as it can be, I just can’t get any further than a little past where the knot starts to widen. I can’t get over it, and probably never will because, at that point, the pointed head is poking my cervix. The tip is soft, and I haven’t found the poking painful. It’s just that that’s all the further I can go.

There is a hole in the head (and the “adapters” if you get one), so that the wearer can still ejaculate through the sleeve. Some does get left behind, but a decent amount is pushed out. You can wear this sheath with or without a condom underneath.

Beta Sheath: Cleaning for this sheath is really easy. A little soap and water, boiling it for 5-10 minutes, or sending it through the dishwasher sans detergent makes cleanup almost effortless. There’s no need to turn the sleeve inside out, or to cram my hand down it, to get every little bit clean.

Cerberus: Because this is an enclosed, long sheath, it can be more time-consuming to clean. Also, trying to turn it inside out is a royal pain in the butt. The same methods used to clean the Beta Sheath can be used for the Cerberus. If you have the adapters, I recommend boiling them every time. Washing them by hand or through the dishwasher has never gotten all the lube/cum out of the hole that reaches through them.

Cerberus: This is going to take up more space than the Beta Sheath. Not only is this sheath longer, but you may also need to store one or two adapters. The suggestions for storing the Beta Sheath are the same for this sheath.

So… I guess I’m supposed to decide which one is better now, huh? Well, I just can’t do that. Each of them has its good and bad points, and each of them is going to work differently with different people. I really like the look of the “Beta Test” Wearable Cock-Sheath better, but my husband has refused to ever use it again after two mishaps. The Cerberus K9 Sheath is great for him, but I’ll never be able to tie the knot. Can I have maybe a combination of the two?

Depending on what you’re looking to use either sleeve for, check out that category in this comparison and decide from there. I’ve heard so many stories go both ways on these sheaths… If you have any specific questions, submit them to the comment box, or you can use my contact button to ask in private.