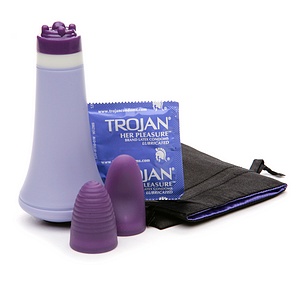 Despite what the directions have this tip labeled as, and what reviews I’ve seen on Amazon have said, this tip doesn’t flicker. At least, it doesn’t live up to my idea of flickering. It also surprised me to see people saying that this is better than oral that anyone could ever give. Umm…okay… Yeah, it’s flexible and sort of tongue-like, but it’s nowhere near being as flexible as a tongue. Of the three tips, this one does carry the vibrations the best, though.

I liked this tip the least. It really doesn’t seem to carry the vibrations as well as the other two tips do. Unless I really press this tip into my clit, I don’t feel much at all. The ribbing on this tip is also very subtle, and it’s not easily felt. There’s a little bit of give to the material, but not much. I really have to pinch it to feel any give.

Set to the highest intensity, the Tri-Phoria rivals my husband’s electric shaver. The lowest setting is about as loud as his little trimmer, and can be heard through a closed door.

It’s got a decent amount of power, maybe a 3.5 out of 5, but the vibrations are buzzy. Compared to the deeper vibrations of the G4 Big Boss that I reviewed, this vibe just doesn’t cut it for me.

The Tri-Phoria comes with it’s own storage pouch for safe keeping. I would recommend using the storage pouch over other methods of storage. Do not let it come into contact with other sex toys (melting can occur when toys touch for extended periods of time), and don’t expose it to extreme heat or cold.

I’ve tried to like the Tri-Phoria, but it’s really not my cup of tea. I really only like one of the tips, and the noise from the buzzy vibrations is just so distracting. The controls irritate me a bit, too. Plus, the packaging was one of the most obnoxious I’ve had to open, given my 4 years of reviewing sex toys. Other than that, the materials are safe, and it’s easy to clean.