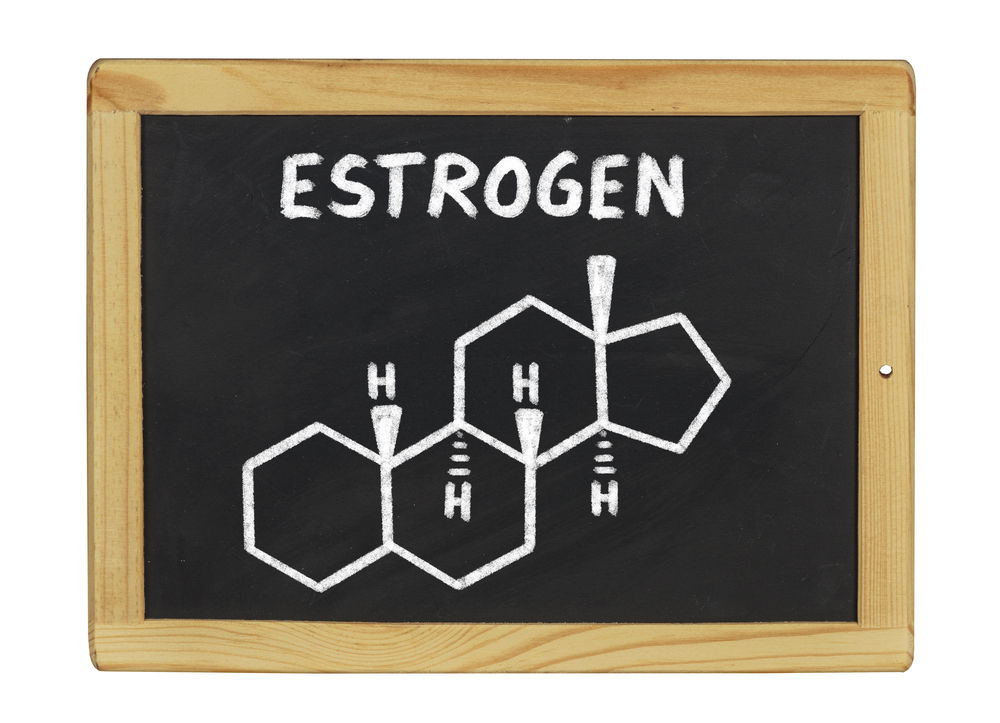 What is the basic role of estrogen in female sexuality? 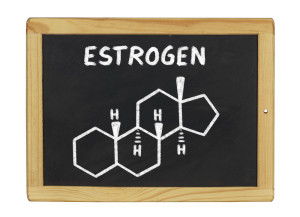 Estrogen is a hormone critical to development of the female reproductive system. In response to the signals from the pituitary gland – the body’s hormonal control center – a girl begins to secrete estrogen from her ovaries a number of years before menstruation begins. From that point on, estrogen is produced on a regular monthly cycle and released from the ovaries. It has a role in the development of egg follicles and the release of eggs into the fallopian tubes. After the eggs are released, a second hormone called progesterone, also produced by the ovaries, signals the beginning of the menstrual cycle.

Some researchers believe peak sexual arousal also corresponds to the release of estrogen, but most studies dispute this theory. The monthly cycle of estrogen and progesterone production typically continues until a woman is in her late 40s or early 50s.

What happens to a woman’s estrogen production when she reaches her late 40s or early 50s?

At some point in her life, every woman experiences a marked change in estrogen production, which leads to menopause – the permanent end to menstruation. Menopause usually occurs between the ages of 45 and 55, although some women experience their last period in their 60s, and others in their 30s. Ovary removal, chemotherapy, and other circumstances can abruptly bring on menopause.

Menopause is preceded by a time known as perimenopause, during which fluctuating estrogen levels cause irregular menstrual periods and, in roughly 15% to 20% of women, symptoms such as hot flashes. A hot flash is a physical sensation of intense heat lasting three to six minutes that raises the pulse and often causes a skin flush followed by chills. Many women experience diminished sexual enjoyment during perimenopause, including arousal problems, difficulty achieving orgasm, and pain during intercourse.

After reaching menopause, most women do experience some signs and symptoms, though many of these resolve as the body adjusts to its new, lower estrogen level. Up to 90% of American women experience hot flashes at some point, but in half of those affected, the flashes stop occurring within a year. In addition, only 20% of women experience them for more than two and one-half years. Other potential symptoms include mood swings, insomnia, irritability, weight gain, changes in body shape, and changes in the genital tract.

What’s the likely impact of menopause on a woman’s sex life?

First, let us say that it’s important to get beyond the stereotype that postmenopausal women no longer enjoy sex.
On the negative side, because estrogen is partly responsible for the internal upkeep of the genitals and urinary tract, sexual health can be affected. As a woman’s estrogen production fades, her vulva and vaginal folds flatten and her vagina may constrict and lose much of its natural lubrication. Vaginal infections may become more frequent. Some 59% of women report problems such as vaginal dryness, decreased sexual drive, and painful intercourse. For those who experience these symptoms, there are a variety of effective treatments.

On the other hand, the changes brought on by menopause do not have to signal an end to a woman’s interest in sex or desire for sexual intimacy. In one survey, a surprising 90% of postmenopausal women said they were happy with their sex lives – the same proportion that reported sexual satisfaction before menopause. More than 80% said they continued to feel desirable and more comfortable with their bodies than they did when they were younger. Freedom from contraception and unwanted pregnancy are two factors that play a role in these positive feelings about sex at midlife.

How are menopausal symptoms treated?

Menopause is a natural process, not a disease. Researchers disagree on how aggressively to use therapy for menopause-related ailments, but sexual complaints and general symptoms can be addressed.

Historically, the biggest medical issue surrounding menopause has been the link between falling estrogen levels and increased risk of osteoporosis (brittle bones) and heart disease. It is the concern about these two risks that has driven the trend to place a large number of women on hormone replacement therapy. Hormone replacement therapy also can play a key role in treating the sexual symptoms of perimenopause and menopause.

What is hormone replacement therapy?

Hormone replacement therapy is basically an attempt to mimic the daily release of estrogen using synthetic replacements. There are four major ways of delivering the estrogen:

Is one form of hormone replacement therapy better than another?

Not better, necessarily, the choice method should be based on each woman’s individual needs and medical history, but there are two fundamentally different approaches – systemic therapy and local therapy.

Systemic therapy includes oral and transdermal forms of administration, where the hormones are either absorbed though the gastrointestinal tract or absorbed into the circulatory system through the skin. We call these forms ‘systemic’ because the hormones are literally taken up by the circulatory system and delivered to numerous sites within the body.

In general, local therapies minimize systemic absorption, which means a greatly reduced risk of estrogen-related side effects. On the other hand, the systemic benefits of homone replacement therapy, such as reduced risk of osteoporosis and heart disease, only come with systemic administration.

What about progesterone? Doesn’t that need replacing, too?

Yes. Authorities say that estrogen replacement should be supplemented with doses of progesterone that keep the system in balance. In fact, experts agree that unopposed estrogen – that is, estrogen taken without progesterone – is generally not recommended.

A variety of approaches and doses are used; most are oral medications. Some practitioners will prescribe progesterone replacement for 10 to 14 days out of the month, mimicking the natural cycle before menopause. Others may advocate a small daily dose. Some estrogen formulations are a mix of estrogen and progesterone.

What are the long-term benefits and risks of hormone replacement for women? 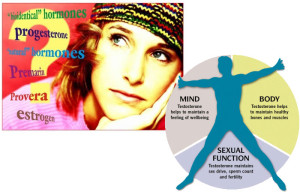 Estrogen lowers the risk of osteoporosis and reduces the risk of heart disease – the leading cause of death among older women in the United States. Recent studies suggest estrogen may also reduce the risk of Alzheimer’s disease, improve memory, and prevent colon cancer, though further research is needed to confirm these findings.

Despite the benefits of estrogen replacement, some studies have shown it can increase the risk of breast cancer in women who use it longer than five years. Experts disagree on the risk, and more specific studies are under way. The Women’s Health Initiative, sponsored by the National Institutes of Health, is testing the effects of hormone replacement therapy on breast cancer, heart disease, and osteoporosis.

It can, but experts on menopause point out that changes such as vaginal dryness occur gradually, and it may be years before they warrant hormonal intervention. If the only immediate problem is one of lubrication and the doctor finds no other reason to intiate hormone replacement therapy, a woman may find she’s adequately served by an over-the-counter lubricant such as K-Y Jelly, Astroglide, or Aqualube. OTC vaginal moisturizers such as Replens and Gyne-Moistrin can also helpful in restoring elasticity to the vagina. However, thinning of the vaginal lining and other vaginal changes at menopause may cause discomfort or irritation that require hormone replacement therapy.

Usually the first line of therapy is vaginal cream, which alleviates symptoms such as dryness within a few weeks and often gives greater relief than pills or patches because the effect of the medication is local. Vagifem, the vaginal estrogen tablet, or Estring the ring that is inserted into the vagina to release a steady supply of estrogen, are two other options. Insertable estrogen medications or estrogen creams offer a smaller estrogen dose with fewer side effects than pills or patches, an especially important consideration for women who have good reason to be worried about breast cancer. But women who are at high risk of osteoporosis or heart disease may need a systemic method (such as pills or patches) as long as they have no risk factors preventing them from taking hormones.

Some women find that vaginal irritation remains a problem despite systemic hormone replacement therapy, in which case supplemental local therapy may be useful.

Are hormones besides estrogen and progesterone used in hormone replacement?

Yes. Even though we describe testosterone as the principal male hormone, women produce testosterone as well. Though still controversial, there is growing support for the notion that lack of testosterone is a cause of diminished sexual drive in postmenopausal women. Accordingly, some physicians have begun recommending that a very small amount of testosterone be added to estrogen and progesterone therapies. This approach has been shown to increase desire in women who have had hysterectomies (and have therefore undergone surgical menopause), but the evidence isn’t as clear for women going through natural menopause. Plus, the long-term effects are unknown. Possible side effects include increased growth of body hair, oily skin, and increased blood pressure.

Are problems of sexual function at menopause a legitimate reason to see a healthcare professional?

Absolutely. Any woman who experiencing sexual dysfunction with the advent of menopause should consult a medical professional about ways to manage the problem. Unfortunately, survey results show that sexual function is not as frequently discussed with healthcare providers as are other aspects of menopause – partly because of the embarrassment that women or their healthcare providers may feel in broaching the subject.