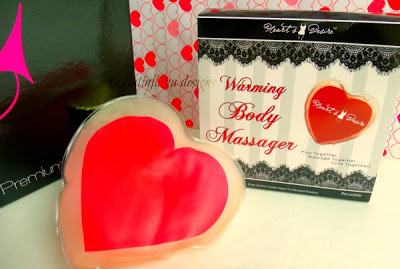 The Heart’s Desire Warming Massager made by Classic Erotica is designed to add a warm touch for a more sensual massage. It’s a reusable liquid heart-shaped pouch that turns to a warm solid with the click of a little metal disk.

I’ll be honest, I wasn’t really wanting the Heart’s Desire Warming Massager for massage purposes. Well, not entirely. Acquiring a reusable, portable, hand-warming thing for the Winter was also on my agenda.

The packaging is fairly simple. A printed sleeve with some information and the product picture is wrapped around the outside of a white box, which holds the massager that is sealed in a clear plastic bag. Be careful cutting open the bag, so you don’t cut or puncture the massager. Although the packaging does make the massager look like it has text and lingerie screen-printed onto it, the massager is devoid of any design. Although I like it better without anything on it, as it is more discreet, the packaging should accurately represent the product.

The packaging doesn’t state anything about the material. It’s also faking being bilingual. On the front, you’ll see the word “reusable” in English and French. The only other French on this packaging is to state that the item was made in China. None of the instructions or warnings are written in French, everything is in English. So, what exactly was the point of including two snippets of French, if the more important information isn’t translated, as well? English is my mother tongue, and I don’t speak French, but this really irks me.

The instructions on the packaging are fairly well-written, and the warnings seem to cover pretty much everything. However, instead of 130°F (54°C), the instructions say 129°F (54°C).

The box says nothing about the material, but EdenFantasys product page says it’s PVC, and I wholeheartedly believe them. You can definitely tell… Phthalates stink, ahoy! This thing smells like a new shower curtain, and my head just doesn’t appreciate something like that.

After a little research, I found out that the massager is filled with sodium acetate and water. If the massager ever leaks, you don’t have to worry. Sodium acetate is non-toxic, and is also used as a food additive.
So, yay that the contents are safe, at least. Can’t say the same for the heart pouch.

At 5” long x 5” wide, this massager is actually about the size of one of my hands (I have small hands..). It might be a nice size for most to use for massage, but it doesn’t really fit in the palm of my hand. It’s a little bulky for me.

This massager is what is considered a sodium acetate heat pad. It contains both sodium acetate and water. Sodium acetate is great at supercooling, and “freezes” at 130°F (54°C). It can exist as a liquid at much lower temperatures, and is very stable. Once that little metal disk is clicked, though, it forces the molecules into a solid state. At this point, the rest of the liquid hurries to solidify, too. This spikes the temperature up to 130F.

Below, you can see the little metal disk, and the massager in the process of solidifying.

You can boil the massager for 7-10 minutes (however long it takes to fully return it to a liquid state) and melt all the crystals that formed. If you don’t melt all the crystals, they’ll just reform without even clicking the disk. Wait until the massager has cooled completely before boiling it. Carefully remove it with non-piercing tongs and allow to cool before using again. Do not microwave this thing. After it cools, you can just click the metal disk and turn the massager into a warm solid again.

Watching the crystals form, after clicking the disk, is actually very entertaining to me. Maybe I’m just easily amused, but I find it interesting. It takes maybe about 5 seconds for the whole thing to solidify, but… it’s not solid. Instead of something rock-hard, like a warmer I had tried before, this thing remains somewhat soft. It’s almost like pressing on partially compacted snow.

The warmth lasts about an hour before it seems to start fading. It’s not super hot. Although the instructions state to test the massager out on a small area of the body for comfort, prior to full application, I haven’t found too hot for comfort. Really, I’ve taken hotter showers.

It’s alright for massage, but the edges are a little on the sharp side. They’re like the edges of clamshell packaging, only softer. They shouldn’t be a problem, for the most part, but I felt I should mention it. Also, I would use some massage oil, or some sort of lubricant, to make gliding it over the skin easier. Since it’s PVC, it’s compatible with any massage oil or lubricant.

First of all, I’m not keeping this thing. I wreaks like phthalates, and I can’t stand it. It works as intended, but the material isn’t very safe. It’s also not as warm as I had hoped for. This is getting packaged up and is going right out the door. Plus, the packaging’s failed attempt at being bilingual, and the lack of information about the material irk me.