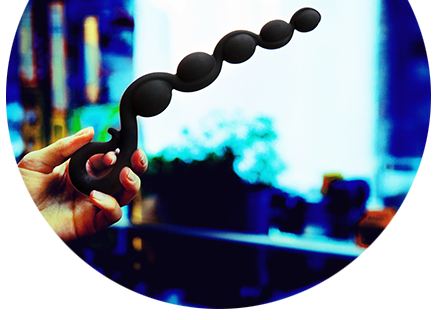 GoodVibes always ships discreetly. My Bendybeads came, along with some other goodies, in a plain brown box with the return address as “Barnaby Ltd”.

The Bendybeads were boxed in Fun Factory’s typical packaging; a plastic cradle holding the toy with information, a small catalogue, and a sample of Toy Fluid inside a grey and red cardstock box. The two magnetic flaps open from an image of a red version, to the display window of the toy, along with a decent amount of info in various languages. On the other side of the package, the toy can be seen without having to open any magnetic flaps. Although there’s nothing tacky and overly raunchy about it, you can see the toy, so the packaging isn’t exactly discreet.

This toy is made of pure silicone, making it hypoallergenic, hygienic, phthalate-free, latex-free, odorless, tasteless, boilable, bleachable, and completely nontoxic.

The surface seems to hold onto lube decently. While using it vaginally, I haven’t noticed much drag to it. The snake that winds around the beads provides a little extra stimulation, but not much.

All of the beads are rather dense. They have a little give to them, but it’s very slight. Still, the spaces in-between them are easily manipulated. Also, the handle, though skinnier than the beads, is actually just fraction of a difference in density. The handle is fairly dense, and it takes some force to squeeze the loop closed.

If you want to, you can actually bend the whole toy around easily and secure the top bead through the loop. Lube it up and slip it over your penis, or your partner’s penis, and use it during a hand job or as an addition to oral sex. Just make sure you have plenty of lube for it and be careful not to pinch the foreskin.

The flexibility and density of this toy could make it or break it for some folks, mostly if you’re planning on using these for thrusting. I’ve had no issues inserting these vaginally or anally, but they do bend at the connections when trying to insert them anally. I always have to use both hands to steady these to insert them anally.

To the right, you can see how big it looks in my hand. I wear a size 4 wedding ring, which could really be sized down to a 3.5, so most toys tend to look much bigger than they really are when I hold them.

It’s best to use water-based lubricants with silicone toys, otherwise you could risk some negative reactions with the material. Fun Factory advises a patch test, if you plan to use silicone-based lubes. Place a small amount on the base and wait a few minutes. If it gets gummy or tacky, that lube is not compatible.

While I don’t find the beads filling, the popping of the beads is nice. Due to the density, though, I can’t insert it too far, otherwise I have issues with the first bead poking my cervix.

Since the loop can be closed, you do have a slight chance of your butt sucking this toy up. It’s a very small chance, since the loop shouldn’t flatten under normal circumstances, but I just want to put that warning out there.

I prefer to boil this for 5-10 minutes, but you can also stick it in the top rack dishwasher on a regular cycle, wipe with a 10% bleach solution and rinse, or simply wash with a mild soap and water. Allow it to air-dry, or wipe it with a lint-free towel before storage. Toy cleaners and wipes are another option.

Keep the Bendybeads somewhere safe from dust and hair, where it won’t get squished or touched by other toys. You can keep it in the box it comes in, a bag, toy box, etc., as long as it stays clean and dry.