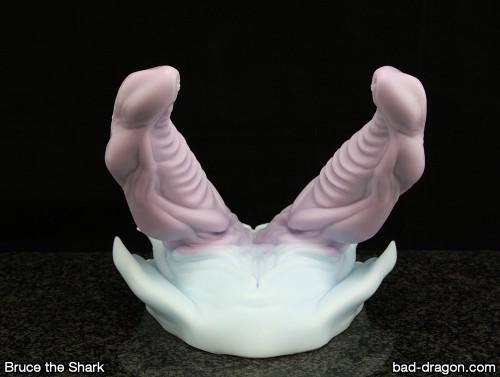 My BD toys always come in boxes just big enough to fit the toy inside. There’s never anything stating the contents, and the company name is nowhere to be seen. What you’ll find on the return address is the name “Jan Mulders” instead.

Inside was toy encased in a poly bag and cradled in purple tissue paper, along with the a beta tester team pin and a sample disc. On the bottom of the toy was a sticker stating that the toy was made in the US.

Okay, sizing for this toy is a little odd. Small means that you’re getting one half of it, and medium means that you’re getting both halves. Or, at least that’s what was being considered at the time. I got a medium, as that was the only one available during the “beta test” sale. There hasn’t been an official final release of this, and it’s not available for purchase since the beta ones sold out, so sizing could change, depending of in they do any redesigning.

Anyway, below you can see how it looks compared to a normal coffee mug. BD did offer these for sale at one time, but they haven’t gotten them back in stock since. It’s kind of a shame, since mine accidentally got broken at the handle… It’s super-glued in placed…

This toy is made from pure, body-safe medical-grade silicone. This means that the toy is hypoallergenic, phthalates-free, latex-free, odorless, and tasteless. It can easily be sterilized and shared between partners.

BD’s silicone is customizable according to three different grades of firmness. I chose Soft (3), but you can also request Medium (5) or Hard (8).

I would not use anything other than water-based lubricants with this toy. Silicone-based lubes can bond to silicone toys, leaving a sticky, gummy mess. This is either due to poor quality in the silicone-based lubricant and/or toy. If you are set on using silicone-based lubricant, do a patch test first on the bottom of the base. Leave a drop on there and wait to see if things start to feel tacky. If they do, scrape that junk off and wash the toy thoroughly. Never use that lube on this toy again.

(If I put it on my head like a hat, I look like an alien bug thing.)

You can see the texture, and details such as the urethra, a little better below. Although the ridges look prominent, the texture isn’t abrasive in the least. Also, although the head looks pointy, it’s so squishy that there’s no way it would hurt.

I can’t really say that the “fins” on the side really do anything for me. I think they’re mostly just for aesthetics. You could use them as handles, but they’ll be too slick to hold onto if you have lube on your hands.

I never do anything really but ride this toy, since it’s easier for me. I’ve found the best place to put it is on the edge corner of a chair. Trying to use this with one hand is too tiring, and trying to use with with both hands is kind of awkward.

I was a little disappointed in the construction. It looked like it hadn’t been trimmed properly. Near one of the urethras, I found a tiny pearl of silicone. It was easy to clip off with a cuticle scissors, but it seemed a bit careless.

Otherwise, this toy is made of high-quality silicone, and can last a lifetime if properly cared for.

My first attempt at double penetration with this toy took over an hour and included lots of cussing, multiple positions, some silicone dick throttling with even more cussing, and a very strong urge to chuck the thing across the room. I was determined, though. After much frustration, I finally got the thing in both holes. Was it worth it? Yes and no. The payoff was excellent, but I just wanted to take a nap for hours after, and ended up stiff and sore the next morning (leg and arm muscles).

Due to all the nooks and crannies, I prefer to send this toy through the dishwasher (sans detergent) or boil it for 5 minutes in a pot large enough so the toy doesn’t touch the sides. These methods, along with wiping with a 10% bleach solution or even using baby bottle sterilizing mix, are generally the best for sterilization. You could also use a mild soap and water. I would advise having a soft toothbrush handy to clean all the crevices.

So, to sum things up:

I’m not sure when the final version of this will be released, but I’ll keep you all posted! In the meantime, click below, or any of the green text, to go check out what else Bad Dragon has to offer!